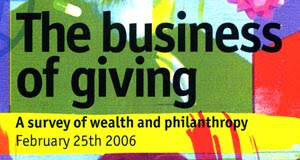 Recomendo também estes sites lá mencionados:
- http://www.schwabfound.org/
- http://www.ashoka.org/ - "The job of a social entrepreneur is to recognize when a part of society is stuck and to provide new ways to get it unstuck. He or she finds what is not working and solves the problem by changing the system, spreading the solution and persuading entire societies to take new leaps. Social entrepreneurs are not content just to give a fish or teach how to fish. They will not rest until they have revolutionized the fishing industry."

The Economist - SURVEY: WEALTH AND PHILANTHROPY

Philanthropists now talk about “social investing”, “venture philanthropy”, “social entrepreneurship” and the “triple bottom line”. The new approach to philanthropy is “strategic”, “market-conscious”, “knowledge-based” and often “high-engagement”, and always involves maximising the “leverage” of the donor's money.
---
Being constrained by neither voters nor shareholders, they can take risks to find pioneering new solutions that can then be adopted on a larger scale by governments or for-profit firms.
---
But not everyone is convinced that philanthropists must become more business-minded. (…) His reason is disarmingly simple: “Most businesses are mediocre.”
---
In recent years, a host of new firms and institutions have been created that, with luck and good management, will provide the infrastructure and intermediaries of a philanthropic capital market, an efficient way for philanthropists to get their money to those “social entrepreneurs” and others who need it. These newcomers include management consultants, research firms and a philanthropic investment bank of sorts.
---
UBS, a Swiss private bank that counts many of the world's richest people among its clients, is conducting an interesting experiment in Brazil, Mexico and Argentina. It has formed an alliance with Ashoka, a global organisation that identifies and invests in leading “social entrepreneurs”. (…) “As the biggest wealth manager in the region, we are at the crossroads between capital and ideas—so why not bring the people with capital together with the people who have ideas?”
---
“In the business sector, people are very comfortable with the idea of investing in an organisation, and the need to build up its infrastructure. In the social sector, the tendency is to invest only in a programme; there is very little investment in building organisations,” says Mr Collins. Yet often, in yielding to public pressure to keep down overheads, “non-profits sacrifice efficiency for virtue”
---
Philanthropists can even encourage non-profits to move towards becoming for-profits, able to stand entirely on their own feet.
---
“In Britain, Venturesome has been arranging unsecured loans for charities, typically bridging finance for those waiting to be paid a promised grant.”
---
“Driven by growing demand from wealthy clients, private banks such as Goldman Sachs, HSBC, Coutts and UBS are now scaling up philanthropy advisory services way beyond traditional tax and inheritance advice and asset management. A growing amount of consulting advice, too, is available to philanthropists and those they fund. Rockefeller Philanthropy Advisors is probably the leading consultancy concentrating solely on the giving side.”
-------------------

«Skyline Public Works is an incubator of a different kind. Instead of focusing on commercial businesses, the Redwood City outfit incubates political entrepreneurs in an attempt to grow nonprofit and for-profit organizations that will champion changes in progressive politics around the country. For SPW, incubation includes everything from office space to business advice to capital, all of which is made available by a variety of independent donors and funding sources.
(…) the group should allow an unprecedented level of collaboration and communication between progressive-minded donors and left-leaning idea-generators, a relationship that has existed between entrepreneurs and funding sources in the conservative arena for years.
"The entire political environment is complicated in terms of getting access to people," Falk says. "Our hope is to make the process of getting access for progressives a little easier."»